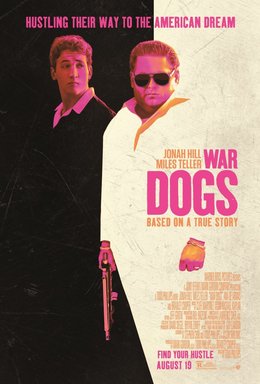 Todd Phillips directs this action filled comedy romp, which is loosely based on the real life account of a couple of unlikely war-profiteers that bungled their way into supplying munitions to the United States military. Phillips targets his formidable comedic chops right between the eyes of the absurdities that are rife within the United States military procurement machine. Jonah Hill and Miles Teller have a lot of fun with their respective roles, with Hill showing nice growth in both his comedic presence, as well as his dramatic chops. Lawrence Sher does a great job of capturing all the action, showing a nice flair for high intensity sequences. Cliff Martinez’s unique score underpins the whole works nicely, adding a perfect emotional contour to this comedic actioner.

While ostensibly a comedy first and foremost, the film leans heavily on action sequences that work well in context, giving the film a great sense of pace and plenty of room for comedic relief. Of course, it would be easy to dismiss the film for making light of such a serious topic, and yet, knowing what we do now about the depth of the graft, corruption, insider-dealing and waste that went into the Iraq and Afghan campaigns, the portrayal of these wayward millennials actually seems all the more fitting. For, the genius of this film is not that Phillips makes heroes out of a couple of knuckleheads that scammed their way into some vast, complex government operation. Rather, he makes fun of the fact that from Rumsfeld and Cheney on down, the whole works is run by nothing but knuckleheads, who would otherwise scarcely cut it as used car salesmen. The evidence lies in the form of the two protagonists, just by the fact that they got there in the first place. Only in ‘MERICA!