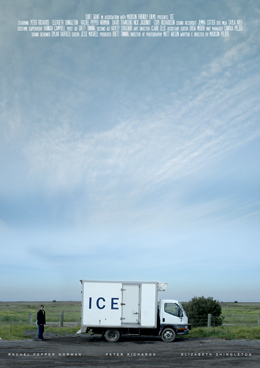 Australian writer / director Madison Pelzer’s Ice is a near text-book perfect example of visual storytelling. Haunting visuals captivate from the first frame, with DP Matt Wilson’s deft camera work giving a great sense of space and mood in the quiet, suburban setting. The story follows a milquetoast, middle-aged delivery driver whose mundane life is disrupted when he discovers a corpse in the back of his van. Sent scurrying off to work  by his emasculating wife (expertly portrayed by a wonderful Rachel Pepper Norman), the driver buttons up the back of the van, leaving the corpse inside. The beauty of the film though, lies not in the corpse, but rather in the form of the driver himself.

Amid his humdrum life, where seemingly the only excitement lies in being berated by his wife, the corpse comes to embody opportunity — for escape, for taking chances, for something novel. Floating in this sea of possibilities, he forgets himself for a moment and takes a chance that he never would have dared before. Yet, much as in any fantasy, when reality rears its head, the comedown can be hard to manage. In the driver’s case, his forced return to the mundane hopelessness of his life cut too deep and laid bare a simmering rage underneath. While we’ll never know how our quiet protagonist regained his control, the foreboding sense is that he’s only just begun to explore his emerging dual identity.

All told, this film is a subtle, nuanced and clever piece of storytelling that delivers exactly what a great suspense film should — suspense! Actor Peter Richards shines in the lead role, bringing a delightful performance that strikes every note clean, and he does it all without a peep of dialogue. They say that half the battle in making a good film is the casting, and in this case, this team really hit it out of the park. But, then they took that extra step and combined it with great writing, excellent cinematography and tasteful music and editing. The end result is a haunting, memorable film that will leave you wanting for more.

If you’d like to learn more about this film, check out the link below: