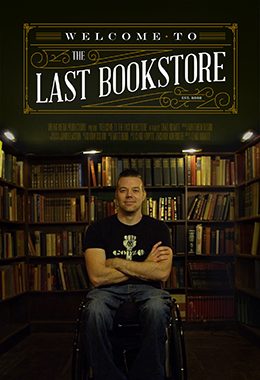 This touching short documentary from filmmaker Chad Howitt chronicles, as the title suggests, the Last Bookstore and its self-effacing owner, Josh Spencer. Growing from humble beginnings in 2005, the store has arguably become a center-piece in the gradual reshaping of downtown Los Angeles that has occurred over the last couple of decades. What is perhaps most remarkable about this film though, is that in the end, it’s about a used bookstore. Standing alone, as repositories for books, they are hardly noteworthy institutions. And, while this one does bear the flourishes of an artist’s touch and sense of design — ultimately, it’s just a used bookstore.

It’s within this little story-telling conundrum that Mr. Howitt’s film really shines, as we see rather quickly that the space that contains the books is not the source of our fascination, but rather it’s the resiliency of the medium itself. Though we may take it for granted today, we must remember, there are people still alive right now that were born before audio or visual recording even existed in any meaningful sense. Yet, those with command of the written word bore witness to the dawn of civilization. It is this thread of resilience that so delicately and beautifully weaves together the story of the bookstore with the story of its proprietor.

For his part, Mr. Spencer was terribly injured as a young man and lost the use of his legs as a result. One can only imagine how devastating this would be to a young, active person in the prime of their life. Even without an imagination, the toll is evident in the extraordinarily high rates of suicide among the members of our military who return from overseas with similar injuries. And yet, within the worst economic crisis since the Great Depression, during a time that saw massive corporations with vast resources failing terribly in the book business, this young man not only started a bookstore, he made it a vital part of the community. To say the success of such an endeavor would be against all odds would have likely been thought an understatement a decade ago.

Yet, here it stands and still under the expert direction of Mr. Spencer. If that is not an ode to resilience, then I don’t know what else could be. Through it all, Mr. Howitt guides the film with a confident hand and a subtle touch, allowing the subject material plenty of room to breathe. It should be said that, while no film is easy to make, the documentary form presents unique challenges that are frequently underestimated by the novice. However, in this regard, Welcome to the Last Bookstore shines, displaying the balance, poise and grace of an expert filmmaker. James Laxton’s excellent camera work aids in this immeasurably, with intimate shots that feel as natural as being in the room. Composer Matt Bobb then subtly ties the works together with a quiet arrangement, making the whole affair about as easy and engaging to watch as could ever be hoped for. This short piece is definitely worth a view, if not just to see a burgeoning L.A. icon.

If you’d like to learn more about the film or the bookstore, check out the links below: