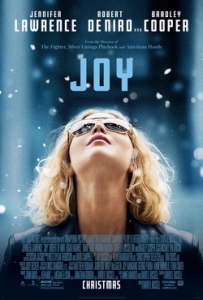 Sometimes, it’s all just so obvious, right from the very beginning. The first scene comes on screen and we just know: this movie is not going to be very good. And yet, we keep watching – not only because we paid for the ticket, but because it’s hard to believe that talent this good would be in a movie this bad. And so it keeps going and for a very long time, it doesn’t get much better. And it never becomes great, it never reaches the level it should, the level we should expect. The director is simply trying to do too many things – satirize soap operas, dramatize a dysfunctional family, introduce a young girl who deserves better than she’s getting, let a grandmother provide contrived narration of the obvious. None of it works very well. There’s no sense of rhythm or pace, no sense of drama or realism, no emotion in the storytelling.

It feels over-wrought, over-staged. It’s not funny – and it’s hard to take it all seriously. How could this be a David O. Russell movie? In 2012, he directed “Silver Linings Playbook” and a year later, “American Hustle” – both with Jennifer Lawrence, Robert De Niro, and Bradley Cooper; both terrific movies. And now all three actors are back in this one – with additional solid talent – in a story that’ too wacky to be factual and not wacky enough to be fictional — and too much of a hybrid to become very entertaining. It does get better – or at least, more interesting – but that doesn’t happen until well beyond the mid-point and then it becomes more far-fetched again. Too many characters are too one-dimensional and even the talent of Jennifer Lawrence is limited by the writing; she shows us Joy’s resolve, but she never fully lets us see her brains or her talent. She tries to provide human continuity to a character that’s written in surges and snippets. Her journey made her a lot of money. Sharing it has cost us time that could have been spent watching a better movie.