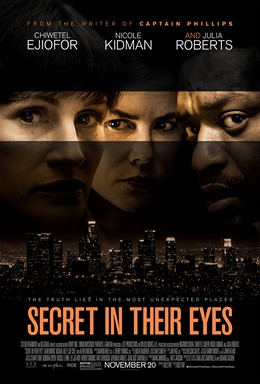 This is a movie that did not need to be made. In early 2010, a far-superior film by the same name – from Argentina — was the Oscar winner for Best Foreign Language Movie (it’s in Spanish, with subtitles); it was wonderful filmmaking. At its heart were two great, interconnected love stories, but it was also – simultaneously – a crime drama and thriller, with some laugh-out-loud moments of comedy – and it made everything work while telling one consistent, engaging story. It did get a bit long and ‘wandering’ in places, but its characters kept pulling you back into a story that was so well told, so well directed and, at times, so exceptionally well photographed (by Felix Monti) – that we clearly didn’t need another version. If you want to see “The Secret In Their Eyes,” rent that one. This one jettisons the humor, simplifies the plot, reinvents a new twist, and ignores a central relationship that made the original so compelling.

Julia Roberts does give a hunting and hollow-eyed performance – and Nicole Kidman was never sexier – but, if you’ve seen the original, you’ll be disappointed with this update. If not, you may feel the same way as a guy leaving as the final credits rolled. “I didn’t know what to expect,” he told me, “but that wasn’t too bad.” The movie cuts back and forth across time – between a crime late in 2001 and today when the culprit resurfaces — in ways that are sometimes difficult to follow. There are also two potential sub-plots – actually, they turn out to simply be distractions – that go nowhere. Unlike the original movie that was a thoughtful psychological thriller, this turns into an old-fashioned chase film. It’s not that there’s anything wrong with that – it’s just there isn’t anything special about it either. As the female leads, Julia Roberts and Nicole Kidman make the most of their roles, but writer-director Billy Ray never really finds the movie’s pace or its pulse – and he lets the plot go on a bit too long. What he delivers is a “Hollywood ending.” It would have been a more intriguing story if he had ended it with just the digging – and the gunshot.