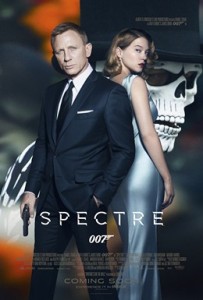 We begin with a brief quiz called: “Here’s the Plot; Name the Movie.”

Plot: In an airborne stunt, our hero attempts to thwart a worldwide terrorist organization led by someone presumed dead. Back home, a bureaucrat is shutting down his agency. Our hero goes off the grid, works with a beautiful accomplice, and, as buildings explode, makes the world safe for special effects. The movie is: a) “Mission: Impossible Rogue Nation;” b) “SPECTRE;” c) neither; d) both. The answer is: d) both. But, to be fair, each movie heads in a very different direction. And this one may be the most satisfying Bond movie ever. It’s not nearly as dark and introspective as “Skyfall,” but it’s also a long way from the superficial eye-candy of early Bond movies. It comes with its own sense of balance and it’s own sense of confidence.

In 24 movies, 007 has been with us for more than fifty years and in whatever era you first met him, there is something in here to acknowledge that. “You’re a kite dancing in a hurricane,” he’s told at one point. But of course, he’s more than that; he’s 007, a man who continues to prove that he’s able to change the wind. Daniel Craig is neither as gritty as he’s been in recent movies, nor as glamorous as his predecessors; his performance mirrors the story that ties up loose ends in the franchise. As Dr. Swann, Lea Seydoux, with her sleepy eyes and breathy voice, brings a youthfully-sexy elegance to her role. Dave Bautista’s grunting performance as Mr. Hinx, captures the spirit of Oddjob and Jaws; Waltz oozes evil with a psychopathic sense of duplicity. While some sequences are too long and the camera is often too static, the movie develops its own sense of pace and finds its own sense of urgency. Silences are broken by furious action and frantic thrills; the humor is sly and subtle; the more you bring to this movie, the more you’ll take away. This is James Bond for every generation.