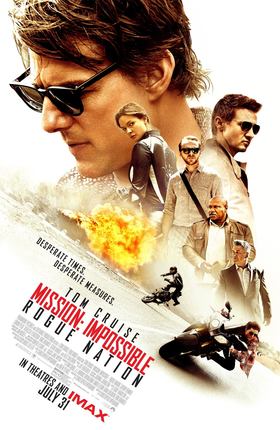 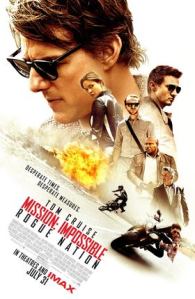 “This may well be our last mission,” William (Renner) tells Ethan (Cruise). “Make it count.” In this, the fifth installment in the M:I series, audience expectations may not be as high as the production budget, but Cruise and company come through. This is two hours of tense, thrilling, and terrific big-screen excitement. It starts with a spectacular stunt – Cruise hanging from the side of an accelerating airplane and then blown out of the cargo door strapped to a load of nerve gas. The plot is off and running. The production values are high; the photography (by Robert Elswit) is polished and often spectacular. The whole movie is more enjoyable if you don’t ask too many questions that involve logic or plausibility; continuity is often provided only by extreme close-ups of Cruise.

The cast divides into two roughly-equal parts: Tom Cruise – and everyone else. Besides Tom Cruise, Rebecca Ferguson has the most substantial role. She makes Ilsa intriguing, engaging, interesting — and without becoming a strong love-interest – she makes Cruise’s character more human. The stunts are fresh and brimming with energy and most appear to have been performed on site, rather than created in the computer. Everything is knit seamlessly, and suspense-fully, together. And yet, despite its thrills, this movie is simply too long. We get to the point – especially later in the film – where we struggle to stay engaged in a storyline that keeps sagging and sliding somewhere else. Still, this is a movie where the audience isn’t looking for a clear and compelling story; they’re expecting popcorn-munching entertainment. On that level, this mission – should you decide to accept it – delivers.