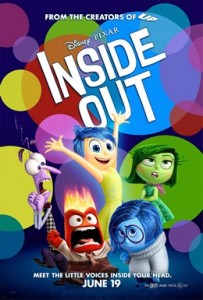 “Do you ever look at someone and wonder what is going on in their head?” With that question, Pixar begins this, their fifteenth animated film. They take us into the mind of Riley, an 11-year-old girl. They show us how she sees her world – and explain it all in a way that’s creatively delightful, often insightfully brilliant. Nobody tells a story quite like Pixar does. They get the nuances of childhood exactly right: the sadness of moving to a new city; the joy in having an imaginary friend; the fear of attending a new school; the disgust of having to answer endless questions; the anger that can only be dealt with by running away. In everything they’ve done before, Pixar has touched our emotions; here they’ve made those emotions the main characters in their story. As we watch what’s going on in Riley’s life, we see also what’s going on in her head.

Everything seems to be in balance until Joy and Sadness – two sides of the same emotion – are whisked off to someplace else. Their struggle to get back gives director Pete Docter lots to work with and he litters his landscape and dialog with puns, sight gags, and the truths and fun of childhood. While smaller children may be lost, older audiences paying close attention will find lots to smile about – while slapstick humor keeps edging its way in. But in a movie so focused on the human brain, the question lingers: Has Pixar forgotten that their real magic lies in their ability to strongly engage the human heart? Here, we have no one to fall in love with. Soft-focus images of family hugs become redundant. And the character with the most emotionally-indelible connection to childhood has its most powerful moment buried in an action sequence intent on making another point. Still the movie is clever, colorful, and entertaining. And at the end, on the Control Panel in Headquarters, we see a button labeled “Puberty.” None of the Emotions seem to know what it means. We can only imagine what could happen if the animators at Pixar were to press it for an upcoming movie.