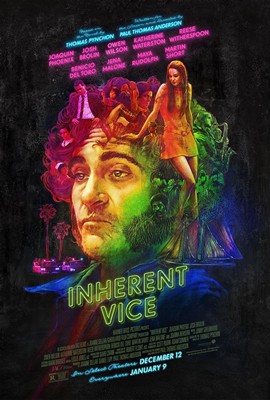 This head trip of a movie seems to have at least a rough destination in mind, but – and blame it on the drugs — it’s also willing to wander down endlessly-confusing and always-convoluted back alleys to get there. How else would it be possible to meet so many whacked-out characters along the way? At times, the plot is incomprehensible. At times, it would be impossible for Joaquin Phoenix to do more dope. At times, it seems like the story will never find its way out of the holes it keeps digging itself in. This film is not for everyone; in fact, it’s probably not for most people. There were times during the movie when I wasn’t sure it was for me. It’s impossible to fully explain; but it’s also impossible to take your eyes off the screen because you fear you’ll miss something strangely interesting.

Director Paul Thomas Anderson has also made “Boogie Nights,” “Magnolia,” and “There Will Be Blood” – so you know he always brings along his own special demons. And if at times they threaten to take over the movie, that’s not all bad; it would be good to have someone in control who is not, in fact, stoned. In the end, maybe everything did come together, or maybe reclusive author Thomas Pynchon, on whose novel this is based, simply moved on the writing another book. It probably doesn’t make any difference. A two-and-a-half hour movie is a long movie. If you do stay interested, it will be because Anderson has filled this movie with an all-star cast playing the wired, the weird, and the weed-whipped. Joaquin Phoenix is befuddled and brain-dead; Josh Brolin is always ranting and raging and eating; Katherine Waterston is erratic and in one very long scene, highly erotic.

Trying to make sense of it all is a narrator, Sortilege (Joanna Newsom), whose entertaining and marginally-helpful commentary tries to convince us that she understands Doc – and this whole sub-culture of surfers, hustlers, rockers and dopers and a DA, LAPD Detectives, and a raunchy owner of a sex parlor — a whole lot better than we do. Uh, maybe. But, should you see it? That depends on your tolerance for the terminally strange. If you do go, don’t try to figure it out; you’ll just get frustrated. This all takes place in the drug-driven early 70’s — and nobody ever understood that time.