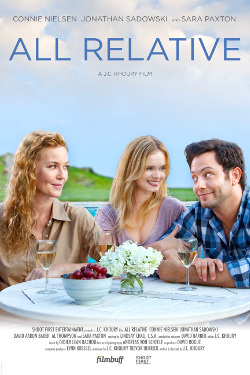 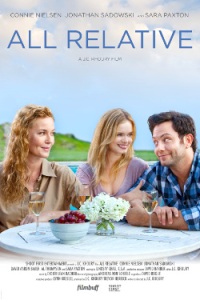 With a premise that almost at once rings as being a deep vein to mine comedy from, writer / director J. C. Khoury seems to rather skim the surface instead. The first third of the film nearly topples over into the puerile ‘cougar’ fantasies which clearly underpin the genesis of the film, ‘All Relative’ still manages to deliver some chuckles in the midst of the non-sense. The cast provides a lot of believable and poignant moments using thin dialog in set-ups that had great possibility, but never rose to their potential.

The film does play though and it kept me engaged well enough to pass the sub 90 minute run time with ease. The few moments that found me rolling my eyes were always readily replaced with enough heart to propel me on to the next scene. The overall production design, while befitting the storyline, felt very in situ. Available light seemed to dominate even interiors, with one intimate dialog scene showing a very visible shift in lighting as clouds passed by unseen outside the window just next to the actors. Overall, the film manages to stumble along, even with its shoelaces undone. The filmmakers misappropriate a lot of great moments for drama almost as often as they seem to miss the laughter the story is just dying to share. In the end, it’s a laudable effort and worth a view, if you have a little time to kill.