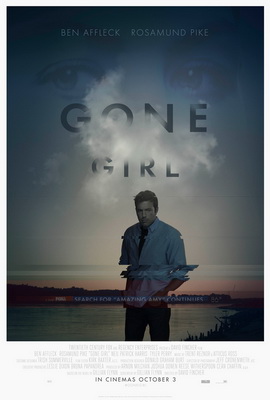 I loved the book and the movie follows it closely — but this movie version is way, way too long. The story twists and turns, but throughout, nearly every scene could be trimmed – and trimming would have picked up the pace, added suspense, and made it seem more like the keep-you-guessing thriller the book was. The book’s unending number of flashbacks are well-handled (because they’ve been dramatically shortened), but the ending goes on long after the story has run out. Several sequences could have been eliminated entirely and the excessive gore of the one very bloody scene was shocking, but unnecessary.

Some roles weren’t needed and others felt mis-cast. In fact, the worst of the casting mistakes was Ben Affleck as Nick Dunne, who just never was believable. He seemed too heavy, too disinterested, too numb-stumbling through his role, too lacking in chemistry with Pike – who, as Amy, was terrific. She was consistently convincing, alternately loving and diabolically scheming, always with a buttery smile and ice-cold eyes. But if you don’t believe Nick and Amy’s torrid love affair – which is at the heart of this story — most of the passion and the fire go out of the movie – and they were gone for me. A thriller should be “tight.” This one felt “languid.” At its core, this movie is trying to tell a compelling story, but take about forty-five minutes – and most of the gratuitous sex, nudity, gore and language – out of this and it would be a better film.