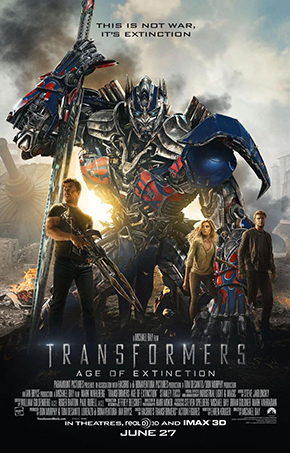 As a director, Michael Bay is a madman; he creates movies on speed. They never lack for over-the-top action, but they almost always lack a beating heart. Case in point: this one. It’s about fourteen hours too long, has about one hundred too many created-in-the-computer “bots,” and about one thousand too many battles. It dispenses with the important – an understandable storyline, human emotion and scene-to-scene continuity – in favor of the urgent; this movie just wants to keep moving – it doesn’t care why or where or if any of the moves make any sense at all.

If you understand the plot, you may want to explain it to Michael Bay; he seems not to care. It keeps going around in circles until it ends with platitudes that would feel right in an eighth grade valedictory speech. But, with all that being said, Bay did make four smart decisions. First, he hired Amir Mokri to shoot it. The lighting, scenery, and cinematography are beautiful. Second, he replaced Shia LeBeouf with Mark Wahlberg as his lead character and Wahlberg is so much more credible, likeable and talented. Third, he made his secondary character a strong young woman with problems teen-age girls could relate to. And fourth, he cast Stanley Tucci in a role that enables him to take over when the movie is starting to languish and needs a jolt of human fun. But the rest of this? How many movies should be made from a set of hinged plastic toys? This is the fourth. It’s at least one – maybe four — too many.