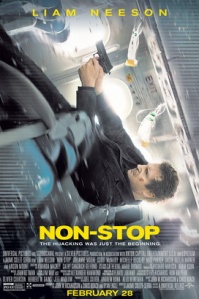 Buckle in for a bumpy flight; Liam Neeson has delivered another tight and taut little thriller. At this time of year, the A-list star turns himself into a haunted and hulking B-movie brawler. And turns in a solid performance. He’s done that several times, always successfully, before. First “Taken,” then “Taken 2,” and most recently “Unknown.” Each is a no-frills exercise with Neeson and a small group of actors working with a script that never overstays its welcome. He’s always cast in the role of reluctant hero – previously rescuing his daughter, his wife, his identity.

Here, he’s Bill Marks, an air marshal trying to protect a planeload of people. Or maybe he’s trying to profit from a hijacking. Or maybe… Whom can he – or we — trust? A kid heading to a job interview? A teacher flying to Amsterdam? A doctor going to a conference? A seatmate trying to calm him down? A guy who claims to be NYPD? Director Collet-Serra does an effective job of making all 150 people on board – including Marks – appear suspicious. Admittedly, the final explanation is more head-scratching than satisfying; and there are plot holes gaping enough to fly a wide-body aircraft through. But the fun is in watching the crisis unfold; unlike most plane trips, the journey is more enjoyable than the destination. In a continuing jet stream of airplane nail-biters, this isn’t particularly memorable or breakthrough stuff, but it is solid entertainment. And in the dark days of winter, that may be enough.