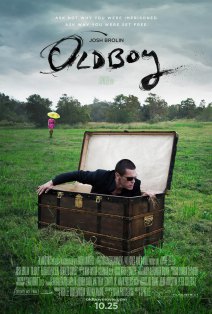 Say what you will, but I honestly think that the only way this English language remake could end up terrible is if Spike Lee gets a hold of it.

I’ll admit it, I was a big fan of the original. Some really unique filmmaking, interesting approaches and a seriously steady hand at the wheel, Park Chan Wook’s ‘Oldboy’ was a film treat. Spike Lee, based on the trailer, seems to have replaced that with a ham fisted, expository, poorly lit violence fest. He’s even managed to screw up what was possibly one of the coolest fight scenes ever played and “re-imagined” to be, well, cheesy.

Check out the original film, is my two cents. It pretty much had me by the curlies from frame one. This trailer just convinced me to never tarnish the memory of the original by polluting it with this cruddy attempt.

Even ‘Vanilla Sky’ looked better than this thing. That was a remake of a pretty cool Spanish film, if you were wondering.

See the cruddy trailer for yourself over at the Los Angeles Times.