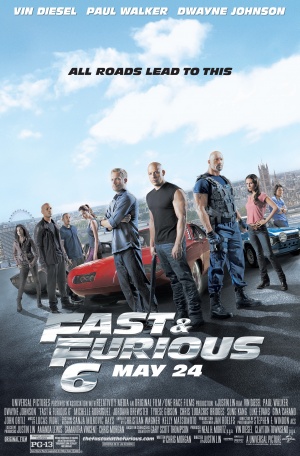 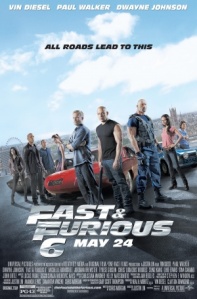 If you’re not a ‘car guy’ – and I’m definitely not a ‘car guy’ – this is a really long and very repetitious movie. But it’s not a disappointing one because what you get is exactly what you expect – a movie that downshifts past an incomprehensible storyline, upshifts through poor acting, powers its way through massive plot holes, and slides around a total lack of suspense of any kind. Everyone is just clutching the steering wheel, tromping the accelerator, whipping through city streets at triple-digit speeds, and hanging on through a predictable story until Vin Diesel – in his gravelly incomprehensible way — says the adventure is over.

But face it – you don’t go to a movie like this one to see an Oscar-worthy performance; you go expecting to see guys (and the butt-kicking women who love them) race and shoot and macho their way through impossible situations and through big-budget locations to the sounds of amped-up rap music and revved-up driving machines. There’s nothing here you haven’t seen before, but seriously – were you expecting that? And it’s also not particularly well done – but then it doesn’t have to be. If you want to see cars and stunt people – and even an airplane — doing preposterous things, you’ve come to the right movie, although judging by the number of visual effects companies and digital artists listed at the end, you have to wonder: Just how much was real anyway? But that doesn’t matter either. What matters is – that you don’t try any of this driving at home.